The masked shiners of La Paz

By Tze-Hung Seeto and John Stuart | Bolivia in South America 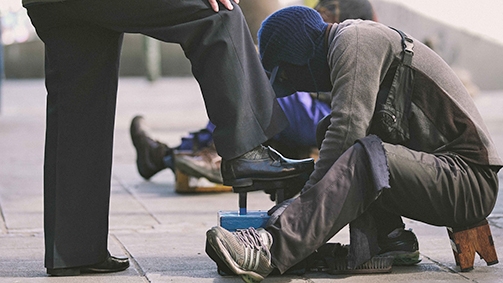 SIM workers Randy and Dani Davis are establishing a church called Kayaparu ('at his feet') amongst one of Bolivia's least-reached communities - the shoe shiners of La Paz. SIM missionaries in Bolivia are identifying who the least reached are and what barriers exist between them and hearing the gospel, hoping that all would come to know Christ.

In La Paz, the shiners hide their faces behind masks. Although shoe shiners work in all Bolivia's major cities, a strong sense of shame is associated with being a shiner. There is a feeling that they are invisible in the eyes of society. Crimes on the streets of La Paz are often committed in full view of shiners, because they are not noticed, or are considered insignificant.

Yet shiners perform an integral service. In Bolivian society, polished shoes are a mark of distinction, so shiners represent a key cog of the social hierarchy. So where does the shame come from and why do they wear masks?

Randy revealed that when he first started working in the community, he was surprised to discover that a large proportion of them were actually university students. Of course there are 'career' shiners and those who are homeless or close to homeless. Some are children and youth who just want to make some money. But a good percentage of them are students simply doing what they must to pay tuition.

The shiners themselves are well organised. They have associations requiring dues and offer changing facilities and assigned shining areas. They come to work in their street clothes and change into their mask and uniform. Some are so secretive about their work that spouses don't even know.

The feeling of shame among shiners isn't necessarily from the work - but from the desperation that forces them into becoming a shiner: A husband who can't support his family any other way; a student who dresses well to keep up appearances around his peer group but who cannot afford his clothes or education; a father who has been fired from his job but can't bring himself to tell his family.

On a good day shiners can earn USD 15. Shiners are attracted to the flexible hours they can work around their class schedules.

This shame leads many shiners to separate themselves from society. They are notoriously secretive and closed. Few know who they are because they hide their identities. And few know the things they struggle with because these are the exact things they are trying to hide.

It's taken years for Randy and Dani to become part of the community of shoe shiners and establish trusting relationships. Today, they have earned enough trust to hold a weekly dinner and Bible study in the shiners' own homes. Together they eat and study the Word together. Up to 30 people crowd into a tiny room with one small window, singing, praying and fellowshipping together.

These people are not invisible in God's eyes. What is happening in these tiny rooms, when the masks are removed and the shame is forgotten, is awe-inspiring.

Ramiro was in his 20s when he first started coming to Randy's basketball ministry for shiners in La Paz. Ramiro was more interested in chatting than in the basketball, but he kept coming, Randy says. The son of a pastor, Ramiro had a common problem among shiners.

"He was really rebellious then," Randy says of Ramiro. "He had a drinking problem and we walked with him through that. It wasn't a perfect process."

Little by little Ramiro was able to walk away from his addiction and God led him to something bigger.

"Ramiro eventually became a missionary," Randy says. "Three years ago we sent him to Santa Cruz to work with a ministry there. That was really amazing how his life changed and how he's reinvesting in kingdom work."

After three years of these Bible studies, they desire to see a shoe-shiner church started in 2017. This church would serve the shoe shiner community and other workers who do services in the street, including vendors and windshield cleaners.

"We want a church plant for shoe shiners and by shoe shiners," Randy says. "We desire for the church to be self-supporting financially. We also want to become a church that is sending one or more missionaries."

The church will bear the same name as the ministry - Kayuparu. This comes from the local indigenous language, meaning 'at his feet' or 'at their feet.'

"We work at their feet to bring them to His feet... the feet of Christ," Randy says.

• the leaders — for continued wisdom of how to plant a church.

• the relational aspect of ministry and for the church community to meet the needs of the shoe shiners.

• another person or missionary couple to work in this ministry.

• more workers to come minister in the streets on a daily basis, to do church planting and day-to-day ministry.