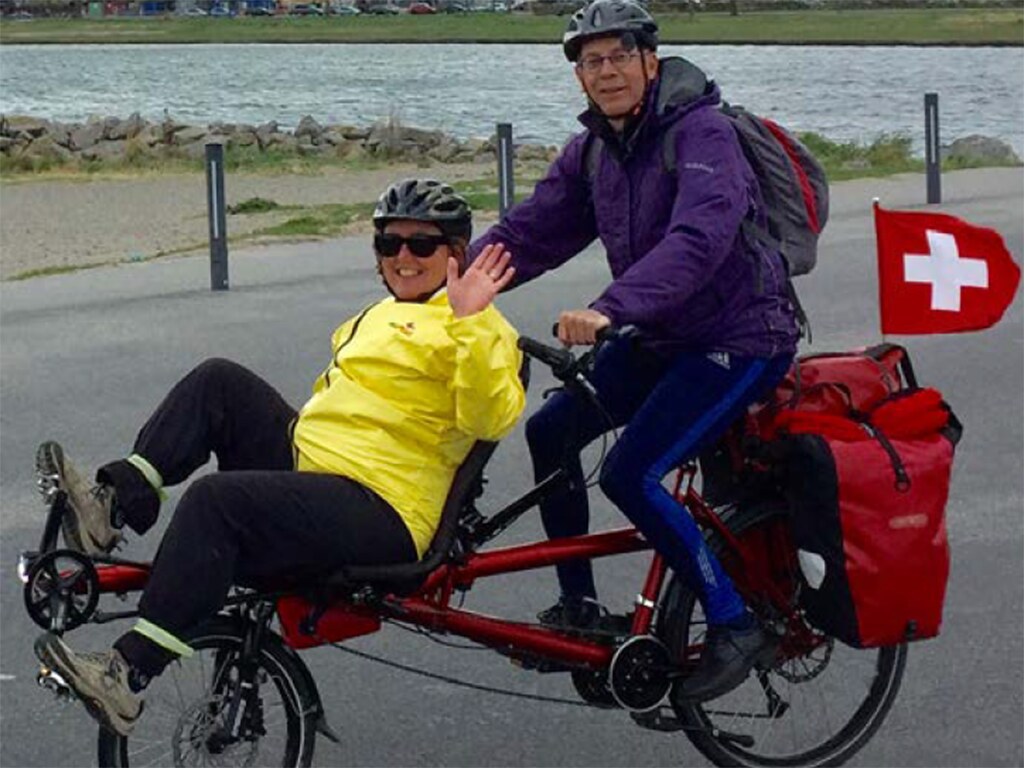 An energetic Swiss couple have completed a 2,500km cycle ride to raise the profile of their SIM ministry in Ethiopia.

Cornelia and Werner Haessig, both in their 60s, rode from their home near Zurich, through Austria and down to Croatia, before crossing the Adriatic and cycling up the length of Italy to return home.

Throughout the journey, the Ethiopian flag flew proudly from their unusual tandem – originally developed to help disabled people enjoy the benefits of cycling – sparking gospel conversations with many interested people.

Cornelia, a qualified doctor whose ministry involves teaching girls what to expect when they enter puberty, explained: “We have been doing these long rides since about 2015, after our children had grown up and we had more time.

“We don’t own a car, so we cycle everywhere and this was the way we took our holidays. It’s lovely to experience God’s creation from a bike – you are travelling at the right speed to take everything in.”

The couple, who have three adult children, had long planned to become mission workers later in life. They’d had some experience of mission work in Asia before becoming parents but stayed in Switzerland to bring up their children and allow engineer Werner to build a solar power business.

Cornelia explained: “I qualified as a doctor 30 years ago but didn’t carry that career forward. I brought up our children and was very involved with the local church and teaching German language to migrants and refugees.

“Many of those were from Eritrea and it was in conversation with them that I heard a lot about how women suffered from genital mutilation, and how little their girls knew about puberty.

“One young woman I spoke to said when she had her first period, she thought she was dying!

“My interest as a doctor was in gynaecology but I knew I wouldn’t be able to work in acute medicine again because my training was so out of date.

“However, I really enjoyed teaching so I thought it would be helpful to develop a programme to help young girls learn about their bodies and what to expect as they grew up.”

After selling Werner’s solar power business, they were able to make a short vision trip in 2018. In November, 2019 they moved to Mekelle, in the Tigray region of Ethiopia, and began working with young women there.

That first stay was cut short by Covid and since then the war in the north of Ethiopia has made returning to Mekelle impossible.

Cornelia has since discovered the “Cycle Show” programme, which was developed in Germany to help girls understand the changes that happen in their bodies as they go through puberty.

It explains conception and all the complicated hormonal control systems in women’s bodies, using stories and analogies the girls can understand. It helps girls realise just how special they are – and that God has given them the ability to bear new life. They are thus much better equipped to take care of themselves.

With the help of some Ethiopian women, Cornelia has now adapted the programme for use in that context and was able to try it out when she and Werner returned to the country in April, 2021.

Werner helps out with the course administration and offers solar panel training to local electricians. He has also started work with an NGO which is interested in expanding solar power in Ethiopia.

Cornelia said: “We were disappointed not to be able to return to Tigray but it was, and is, still possible to work in Addis.

“My focus now is on training local women to teach the girls – it’s much better if the teaching can be done in the local language. God willing, we will go back to Addis early next year and carry on with the courses.”

This summer’s cycle trip has brought the couple’s calling into sharp focus. They have shared their love of Ethiopia, and of their ministry, with many people along the way, pointing them to Jesus whenever possible.

Cornelia said: “Not many people seemed to recognise the flag of Ethiopia, so we often had to tell them what it was.

“As we did, we also talked about the country and of the problems it is facing, most of which have been forgotten by the world.

“We often said that when a country is in turmoil, sometimes all you can do is pray.

“And when you talk about praying, people know exactly where you are putting your trust and your hope.”

• For the young Ethiopian girls who go through the training, that they would understand more about their bodies and realise just how special they are.

• For God to raise up more dedicated and reliable women who can serve the girls of Ethiopia by delivering the course in culturally appropriate ways.

• For God to sustain, encourage and give wisdom to Cornelia and Werner as they seek to remain ‘long-term short-termers’ with SIM.