Broken in spirit and deformed in body, Abdou found hope and healing.

“I felt a dog was better than me,” says Mamane Abdou. “I was hopeless; I thought it was the end for me.”

At just seven years of age, no one knew what was wrong with him. He was not functioning as a healthy child ought. He’d reach for a pencil and try to write…only to have his fingers fail him.

Sometimes a diagnosis is helpful. When a mystery ailment is identified it allows strategies to be explored to resolve it.

Such was not the case for Abdou.

Being diagnosed with leprosy as a child was like a death sentence. In Niger, where he lived, leprosy was greatly misunderstood. The disease was thought to be incurable and contagious by touch.

The result? Abdou’s family would have none of him.

“I was the only one in my family suffering from leprosy,” he says. “The feeling of being rejected was so burdensome to me, so dramatic in my life. I couldn’t eat with my relatives, and that forced me to go on the streets, begging in order to survive.”

Being rejected by his family, losing the use of his hands and feet, and facing life on the streets—nightly seeking shelter and daily scrounging scraps of food to survive—wave after wave of hopelessness pummelled Abdou.

Broken in spirit and deformed in body, Abdou was tempted to give up.

Was anything in life worth living for?

One day Abdou was told about SIM’s Danja Hospital in Niger. When he first stepped inside, he didn’t know how radically his life was about to change. 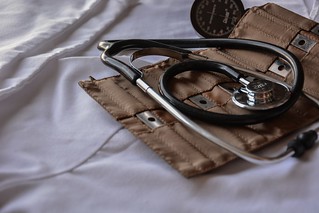 The vision at Danja Hospital is to minister to the whole person as exemplified in the life of Jesus, who preached, healed and taught. (Matt. 4:23). Here, Abdou experienced not only radical physical healing, but complete spiritual transformation.

“At the hospital, I spent three years on the treatment,” he says. “I felt accepted and loved. The nurses would touch me. They would care for me, and I had a family.”

“Before, I was a Muslim,” he says. “But because of the hospital, I met Jesus. Today I am a Christian.”

As his recovery progressed, Abdou’s new life flourished like a budding flower.

Thankful for the future

“Without SIM I wouldn’t have a family,” he says.

“I would be nothing. I’m so thankful to SIM and I don’t think I can be thankful enough. I was healed, SIM sustained me and I found the light of Christ. I am thankful to Jesus because of that.”

When Abdou’s leprosy was cured he became confident enough to learn French, and his fluency allowed him to become a professional translator, which helps him support his family.

You can view a video about the medical ministries at Danja here.

-Pray for Abdou and other new believers taking first steps of faith in Christ.

-Pray for complete healing—physical and spiritual—for patients at Danja Hospital.

-Pray for the SIM team at Danja Hospital as they treat 45 outpatients daily and perform 35 operations monthly.