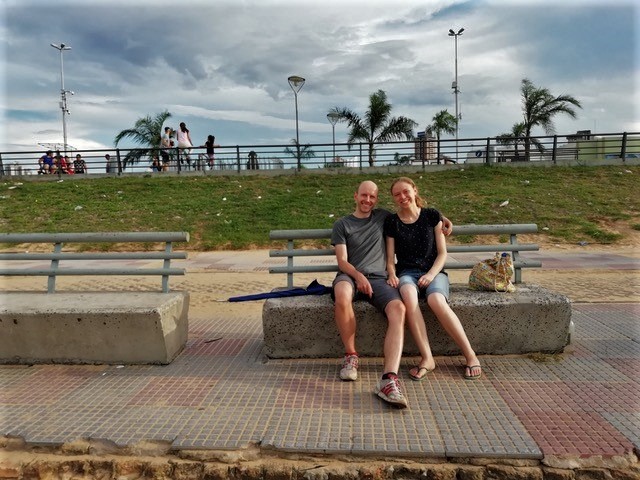 The Gondeks didn’t lack career options. Christoph, a chemist, and Johanna, a nurse, were set up well in their professional lives. During those years of learning, God was working in their hearts. One day, Christoph met DMG International and SIM missionaries, Jonathan and Christine Winarske, who are both from Germany.

Jonathan and Christine serve on the SIM team in Paraguay coordinating short-term placements from around the world. Prior to their move to Paraguay, the Winarskes were building a support team and shared at their church in Aalen, German.

Christoph had been working in a nearby city and was encouraged by their story. After getting married in 2019, the Gondeks came to Paraguay with help and guidance from the Winarskes. Praise God!

God has given Christoph and Johanna the gift of humble service. They believed God was sending them to work at Alto Refugio, a foundation that “offers support to people infected and affected by HIV and AIDS.”

Johanna said: “We don’t think God has drawn us here to do a specific task only we can do. … we are working properly and intending to be a blessing [in all] we do.”

Their willingness to serve without notice 'behind the scenes' and without worldly applause is a stark reminder that God often calls us into places we feel unprepared for.

One day, Johanna met a father with a very ill son, aged 25, with HIV and AIDS related challenges. The father did not have a job and was unable to provide food for his family. He was overcome with thankfulness for the love and care that Alto Refugio gave him and his family. Johanna listened and served; she also thanked God for the ability to be his hands and feet to this family.

With the restrictions put in place due to COVID-19, the Gondeks’ roles have changed. Alto Refugio has temporarily closed, but the Gondeks have not been deterred. They are serving in a guest house called Refugio Primavera, in much the same way: cleaning, folding, fixing, preparing.

While their plans were to depart in August for Germany to “find new jobs, serve in the local church community and encourage people in faith,” they know God may have other plans for their lives. So, they loosely hold their own plans.

In the meantime, they know God is using this time for his glory. As Johanna and Christoph reflected on why God sent them to Paraguay, Christoph said: “We suppose more that God is working in us, teaching us things, breaking our pride, offering us time to talk to him, and leading us into questions about our future. It is a very precious time for us, even though it is not so easy for us each day.”

"We suppose more that God is working in us, teaching us things, breaking our pride, offering us time to talk to him, and leading us into questions about our future."

The Gondeks’ story shows that we serve a God who gives us joy anew and works afresh in our hearts. Would you join us as we praise our almighty God for sending the Gondeks into the harvest? Ask him to continue guiding their steps and giving them peace, even as they’re far from home.

• the Gondeks to continue relying on God to guide them.

• Alto Refugio to reopen as soon as is safe and to extend Christ’s love to those affected by HIV and AIDS.

• the SIM Paraguay team to find ways to share the gospel during the pandemic while keeping social distance standards.