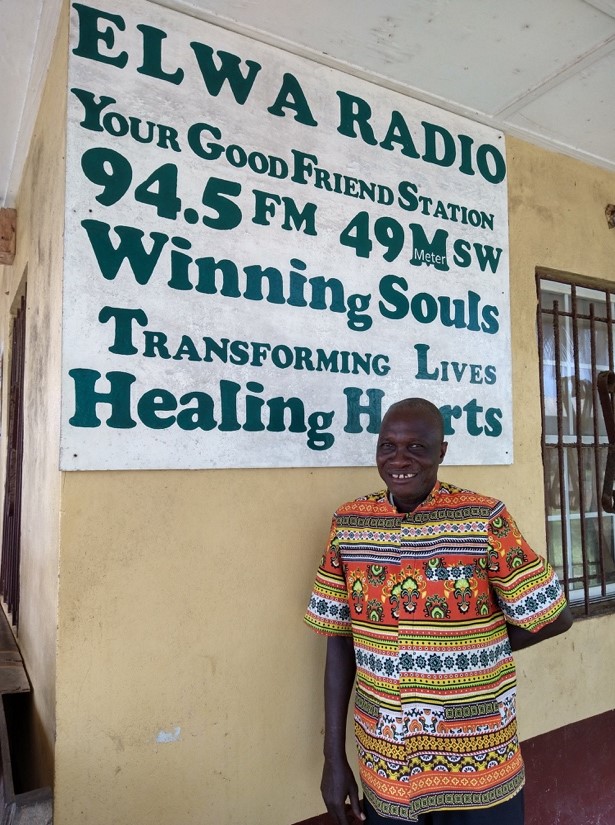 Pastor Sebastian Quaye, the Grebo language announcer for SIM Liberia’s ELWA Radio, was delighted to take up the challenge of visiting the region he broadcasts to. It took nearly four days of round the clock travel by taxi, motorcycle, and on foot to reach Plebo City, Maryland County but it was worth every moment!

Travel along the southeast coastal region of Liberia is impeded by myriad rivers and swamps, but ELWA’s short wave radio broadcasts overcome those barriers to reach people who could otherwise go their entire lives without hearing about Jesus. As the first Christian radio station on the African continent, it has been broadcasting since 1954 throughout West and North Africa and into parts of Asia to spread the gospel and equip Christians with sound Bible teaching.

Pastor Quaye attended a church conference and travelled to four other towns in Maryland and River Gee counties to visit with church leaders and listeners. The listeners were thrilled to meet him in person after hearing him on the radio for so many years! They told him ELWA Radio was the only station they can receive which gives them news from the capital, Monrovia, and from the wider world.

A listener from across the border in Ivory Coast attended one meeting to express his appreciation for the Grebo broadcasts. He explained that when he was out working on the farm, his son became sick and weak with serious diarrhoea. The nearest clinic was a nine-hour walk, and he did not know what to do.

But on that very day, the Grebo broadcast by Pastor Quaye explained how to take care of someone with those symptoms. He followed the advice and his son recovered quickly. Combining practical information and news with Bible teaching, the broadcasts attract a wide audience, far beyond those who would call themselves Christians. In this way, many people who would otherwise have no knowledge of Jesus come to hear the gospel.

In Fish Town City, River Gee County, Pastor Quaye made new recordings of songs and local preachers. He also heard the testimony of a man who remembered Quaye’s visit in 2012, when the Jesus film was shown in the Grebo language. When this man came to the showing, people moved away from him in fear, because he was a “big witch.” But he received Christ through Pastor Quaye that night, when he came to understand who Jesus was. Now he is serving in the church. He said the Grebo broadcasts were touching lives for Christ. Many people even pledged to give financial support to the broadcasts in the coming year through mobile money deposits.

• Pray for the Grebo language broadcasts to continue and to be effective in reaching those who have not heard about Jesus.

• Pray that people will come across ELWA Radio on their dial and stop to listen and hear the good news of Jesus love and salvation.

• Pray for new donors, especially those Liberians who are living outside the country now and who have benefitted from ELWA Radio in the past.