By Miriam | Benin in West Africa 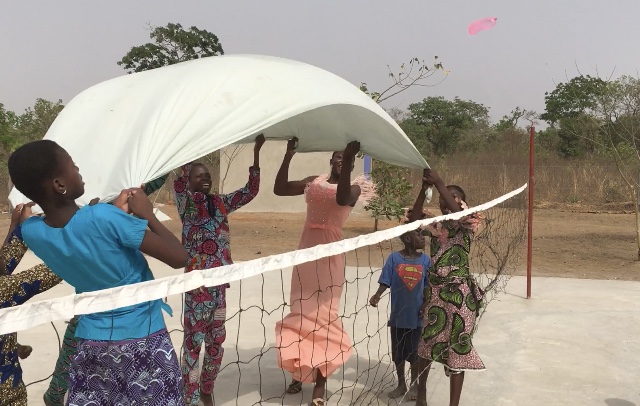 Three-year-old Oussie* was ill and suffering from malnutrition when she began coming to Alafia clinic in Benin, part of SIM’s Hope for Life network. After a traumatic period of rejection from family, clinic staff welcomed her in. For some time, she slept through the evening devotions but now, she sings loudly and is quick to answer questions.

“She brings joy to those who know her and keeps us laughing with her great sense of humour,” said an Alafia clinic worker.

Oussie did not have the best start in life. Several years earlier, Oussie’s father and his two wives, one of whom was Oussie’s mother, were all HIV positive and started antiretroviral therapy (ARV). Her father showed little interest in taking his medication and rarely came for his follow up appointments. Her mother took her medications properly in the beginning, but soon stopped coming as well. They both died from complications connected with HIV in the years to follow.

After her parents’ death, Oussie’s relatives struggled to find someone to care for her. Her aunt was willing, but her uncle refused. Eventually, her grandmother took her in but did not care for her well and rarely brought her for appointments.

A clinic worker said, “We would do home visits and would find her unkempt and neglected. Our efforts to encourage her grandmother to better care for Oussie had no effect. Her relatives were quick to complain of the trouble she caused them, saying she was a difficult child and refused to take her medications.”

In 2018, a Canadian team organised a Vacation Bible Camp for the children at Alafia. Boniface, the clinic supervisor, not only invited Oussie, but also arranged transport to ensure that she could come. The camp was a huge success, with many hearing of redemption through Christ. But Oussie did not turn up, and no explanation was given.

Shortly after, Boniface received a call from her aunt. The grandmother had passed away and Oussie was in poor health. No one was willing to take responsibility for her.

The aunt asked Boniface to come and take Oussie because she knew he cared for other orphans. He said that if no one in the family would agree to care for her, they would need to bring her to the clinic. It would be too traumatic for everyone if he were to remove her from her home.

The aunt arrived the next week and left Oussie at the clinic with a small plastic bag of belongings. Her clothing was dirty and torn, she was malnourished and suffering from a rash and frequent fevers.

Boniface and his colleagues, compelled by God’s great love, cared for her, along with the other orphaned children in their care.

As she regained her strength, she began to ask when she was going home. A clinic worker said, “We realised that her relatives hadn’t told her that she would not be returning to them.” Understandably, Oussie began to misbehave and refuse to do what she was asked, often threatening to run away and go home.

A clinic worker said, “When her aunt came to visit and heard of Oussie’s threats to run away, her response shocked us. She explained to Oussie that if she showed up at home she would die as no one would feed her or care for her.

“Instead of showing sadness, Oussie had a complete change in demeanour. She began helping with chores, going to school, and seemed to genuinely enjoy spending time with us and the other children.”

Now, finding belonging and care, Oussie is a different person at thirteen. She enjoys riding her bike, doing puzzles, and taking care of her pet rabbit, named Hot Dog. Her health continues to be an issue, but she takes her medication faithfully and has a hearty appetite.

SIM’s Hope for Life network responds to issues of HIV and AIDS through collaborative health and development projects in over 14 countries. By meeting the needs of people and through nurturing relationships, we make disciples who will trust and obey Jesus and become part of Christ-centred churches. Consider joining us in this work by making a donation today.

• Please pray that Oussie’s viral load will decrease and that we will find the right treatment for her ongoing stomach problems. Pray Oussie understands the gospel when she is able and comes to know Jesus as her personal saviour.

• There has recently been a shortage of one of the ARV medications at the clinic. Following government protocol, the clinic is switching those on this medication to a newer combination of ARV therapy. Please pray that this will not cause problems for the patients.

• Please pray for wisdom as the Alafia team teaches patients the importance of taking their medications properly and coming for their follow up appointments. Not taking ARV therapy consistently can cause a resistance to the treatment.

• Thank the Lord for a missional nurse who has joined our team for one year. She has been a great help and encouragement to the Alafia team.

• Please pray for two women who began income generating activities in April. Pray that they will use the help they have been given to better their lives and to be self-supporting.