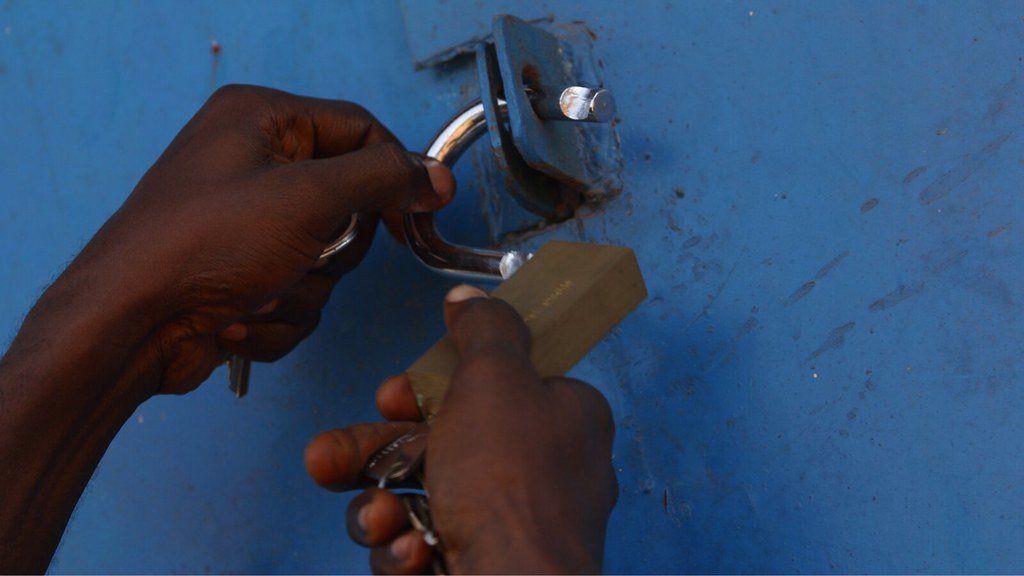 The young Fulani girl moved restlessly around on the pavement outside the mission hospital – tethered by a short, fibre rope tied to her ankle.

Providentially, SIM missionary Roger Collinger* was passing by, returning from an afternoon errand. He paused, not immediately seeing the girl’s family. He sat down next to her on the hot ground and tried to speak with her.

The girl was silent, but clearly intrigued by this stranger, repeatedly grabbing for the sheaf of papers Collinger held just outside her grasp.

Soon, the girl’s father appeared from around a corner. “Are you a doctor?” he asked. “Can you help her?”

A year before the girl had been fine, the father explained – just like her bright, talkative younger sister. “Then the sickness came to her. Now she’s like this. She can’t do anything. She can’t talk. She grabs everything and eats anything.”

The family had tied a rope to her ankle because she wandered aimlessly.

The family were Fulani, a nomadic people stretching across multiple countries in West Africa. They are typically animal herders and predominantly Muslim.

“I’m not a doctor,” Collinger explained, “but I can talk with a doctor.” The family agreed, and he made the arrangements. The next day he met the family in the outpatient department of the mission hospital. The girl still had her rope tether, now tied to a bench in the corner of the waiting room.

While waiting to see the doctor, Collinger held the girl, allowing her to play with papers in his hands. Eventually, she tired, relaxed and rested her head on his shoulder.

The parents marveled. “Never has she sat still that long before,” the father said. Then he asked a heartbreaking question: “Will you keep her?”

No, Collinger couldn’t “keep her,” he explained. And, unfortunately, there wasn’t anything that could be done for the girl. The doctor explained a severe case of malaria had likely led to brain damage. There were no treatments. Yet Christian compassion had touched the heart of the Muslim father. Collinger’s heart was also broken. “It was that sad experience that made me love the Fulani,” he said.

Although assigned as maintenance director for a local Christian organization, Collinger began to visit the Fulani camp regularly. The young girl had opened a door among the Fulani – somewhat distrustful of outsiders, especially Christians – that is typically closed. As time went on, Collinger arranged dental care, medical check-ups and, eventually, the digging of a bore hole to supplement the failing hand-dug well in the Fulani camp.

One topic that repeatedly came up during his visits was education. The Fulani mallam – a learned man who was clan head and appointed leader of the Fulani in the area – explained to Collinger that the children needed a school.

Once, after Collinger left, a larger group of Fulani leaders met. Together they agreed, “Yes, we want education.” It was a significant decision at odds with some in their culture. Still, they didn’t know if this Christian man was “serious.” Would he be able to provide the school? Could they trust him?

Every time Collinger returned to the village, the mallam looked him in the eyes and talked to him again about the need for education.

Meanwhile, having studied the Quran as part of his training, the mallam also sought out different versions of the Bible to investigate. He wanted to understand if they were consistent – if the different versions said the same thing. One was in Fulfulde, the Fulani language. Another was in the regional language. Yet another was read to him in English by a trusted pastor. As he read them, it was an extension of what he was looking for in Collinger’ s eyes: Was it true? Was it “serious?”

For his part, Collinger was serious, and driven by faith in the Book the mallam was studying. Eventually, he located nearby land, designed a building, and worked with donors and local laborers to construct the first set of classrooms. Today, the school has 283 children as registered students. This includes 80 Fulani children attending alongside children from other ethnic groups.

The school was officially registered with the government last year. The parents are proud of their new school, and want to institute student uniforms like a “proper school.”

During breaks in the school day the children play simple games, hopping across the dirt yard and practicing an improvised game of football. Collinger recognises that the sound of laughter in the schoolyard is the result of the sacrifice of many believers – doctors, nurses and well-drillers, as well as churches and SIM donors who contributed sacrificially to the physical and spiritual needs of a distant, unreached people group whom they’ve never met.

Collinger’s relationship with the Fulani started with heartbreak. Yet God turned that experience around. Now there is hope in the sound of lessons heard through the open classroom windows. As long as the door remains open, Collinger prays that hope will turn into joy as Fulani learn more about the love of God available through knowing Christ.

• Give thanks for the good opportunities that have arisen from such a heartbreaking situation.

• Ask that the lines of connection and communication between Christians and the Fulani would remain strong.

• Ask that others, like the mallam, might be able to explore the 'serious' message of the Bible – that they can experience grace and hope in a relationship with the living God who loves them.

*For security purposes, names have been changed and specific ministry locations obscured.