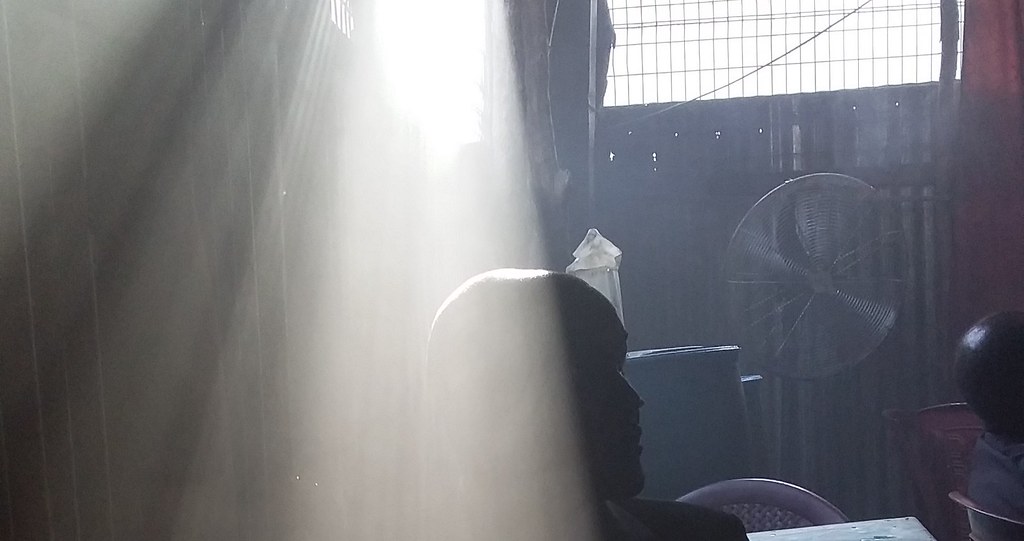 What do you see in this picture? I notice the light illuminating the food and a faint outline of a man across the table. Maybe your eyes also drift towards the fan in the background or you see the whole structure is made of corrugated iron sheets. But it’s hard to see the figures in the frame, and that’s where my interest lies. So, I want to draw out into the light what is in the shadow.

That figure in the shadow moved from Sudan to the refugee camps in Ethiopia following the Sudanese civil war in the ‘80s. There, through the ‘90s, SIM workers taught him English. Following the peace agreement in 2005, he returned to Sudan. In the 2010s, fighting forced him to move again to a refugee camp in South Sudan. His wife almost died giving birth to their child back in 2013 but the Lord spared them.

In 2015, he graduated from Gideon Theological College, where SIM workers taught. He found an opportunity to do further theological studies in Ghana. After completing those, he came back to the refugee camps to partner with SIM by directing Theological Education by Extension in the region.

This picture was taken after he had made the treacherous trip from Sudan to South Sudan just to be with the graduates from the latest batch studying theology. But you wouldn’t have made all that out from this picture.

“There’s not enough exposed in the light! There’s too much hidden in the dark,” one might say.

Usually, we talk about a story “coming to light.” Before that, it’s hidden, unseen, easily missed. But there’s always a story even if it’s not immediately visible …

Maybe that story will stay buried in the shadows because there won’t be anyone to bring it to light. But maybe that’s just a bit of the irony here. The irony that this figure in the shadows may be the one going to hidden corners of the world and bearing great light …

Even if you or I don’t see it.

• For the work of rural pastors equipped with training from TEE serving in communities where Christ is least known.

• For the work of TEE going on in Northern Uganda with South Sudanese refugees residing there.

• Ask God if He’s asking you to equip the church in South Sudan.