By faith we see:

By faith we see:

Communities where He is least known

The Comorian people live on a chain of islands in the Indian Ocean between Madagascar and Mozambique. They can be found on all of the islands and in Madagascar. The different Comorian groups take their name from the particular island on which they live, but the official name of the islands is the Federal and Islamic Republic of the Comoros.

Major problems on the Comoros Islands include poverty, disease, and hunger. Educational levels are low, and less than half the population is literate. Children are expected to help with the farming, fishing, and animal care. Polygamy is an acceptable practice among the Comorian. Although French and Arabic are the official languages of the islands, the Comorian speak their own Swahili dialect. The Comorian are Muslim, but occultism and spirit possession are mixed with their Islamic practices.

Traditionally, they have not been open to any kind of religious change. However, they are gradually becoming more receptive to other ideas. Christian resources are limited, making the number of Comorian believers very small.

Pray for unity and reconciled relationships between the different evangelical denominations. Pray they would unite to reach those living and dying without Christ in Madagascar and beyond.

Pray for a clear and courageous vision for SIM Madagascar as it seeks to develop missionary strategies. 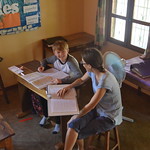 The Good News Project has grown in, engaged with and served Mandritsara in Madagascar. Find out how their gospel-centred service has impacted the town and drawn workers from across the world.

Stories from this Country

The Good News Project has grown in, engaged with and served Mandritsara in Madagascar. Find out how their gospel-centred service has impacted the town and drawn workers from across the world.