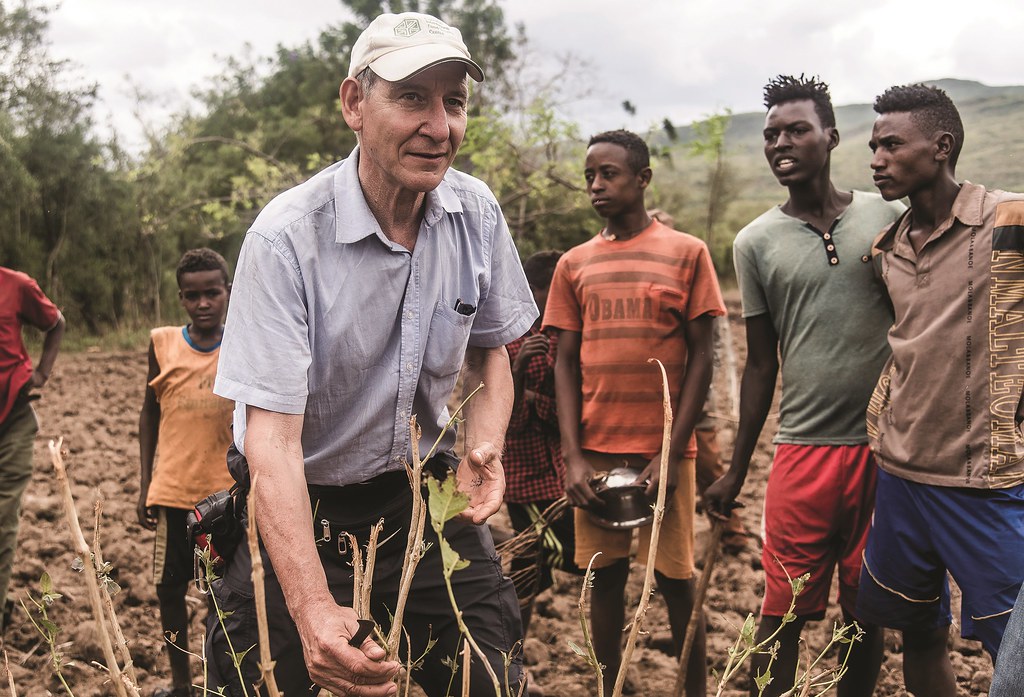 While studying rural science, Tony met his wife, Liz. Both Tony and Liz had an individual conviction that God was calling them to serve in agriculture in Africa. They went on to serve as SIM workers in Niger for 17 years.

During their time in Niger, after unsuccessfully struggling for several years to establish planted trees, Tony discovered a very simple solution to regreening land without planting a single tree. The technique he pioneered, together with local farmers, came to be known as Farmer Managed Natural Regeneration (FMNR). In recent years, FMNR activities have been identified on over 18 million hectares across 27 countries, reducing our carbon footprint, restoring degraded landscapes, restoring hope and transforming millions of lives and livelihoods.

Today, Tony’s legacy carries on through “Sowing Seeds of Change in the Sahel” (SSCS), a project that continues to bring holistic transformation in the villages Tony served, communities that consist of mainly subsistence farmers and herders who struggle to harvest enough to meet the basic annual food needs of their families.

Ruth Perkins, a SIM worker currently serving in the SSCS team in Niger, describes the environmental condition of the country when Tony began his work. “Sand drifts formed against huts. Crops failed in the poor soil. Tony Rinaudo and his team worked beside farmers planting thousands of trees, but few survived.”

In those early days, Tony was ready to give up and go home, but felt that God must have a solution. Tony prayed “forgive us for destroying the gift of your creation, as a consequence of which, people are hungry, they are poor and they fear for what tomorrow might bring. But you love us, you sent your son to die for us. Show us what to do, open our eyes. Help us.”

Ruth says: “In that life-changing moment, Tony realised that the ‘bushes’ that were slashed back each year before the crops were planted were actually trees, with a vast underground root system. Here was the solution to the problem of deforestation! Tony then taught farmers to prune and leave some of these little trees in the fields, and Farmer Managed Natural Regeneration (FMNR) was born.”

The impact of Tony’s work was slow, but profound.

“It wasn’t easy to convince farmers that this was a good thing, but where the brave few persevered, the soil became more productive, and they again had firewood, building timber and all sorts of other benefits. Now people say they will never stop leaving trees in their fields. Niger’s farmers have led the way for many others in the world to find hope.”

But it wasn’t only the fertility of the land where change was happening. Seeds were also growing in the hearts of some of the farmers themselves.

One, Ibrahim*, was warned not to ‘work for the Christians’ when Tony asked him to join the project. But, in doing so, he experienced such practical kindness as the team cared for his needs, and such spiritual gentleness as they answered his many questions, that he slowly grew closer to beginning his own relationship with Jesus.

One night Ibrahim had a dream in which he saw a man on the roof of his house calling his name, saying “I am the way the truth and the light, follow me. But when he got close to the house to see who was speaking, he woke up.

The next night he had exactly the same dream – only to awake once more at the critical moment – and then again the following night. That third evening, when he reached the house in his dream, Jesus finally revealed himself. Ibrahim committed his life to Christ and followed him despite much opposition, and today there is a thriving church in his village.

The SSCS team continues to journey with farmers in their region so they can experience true hope and transformation.

Earlier this year, David* (a local pastor) visited to share how people in his village, mainly women, were struggling to have food for themselves and their children as tradesmen from the city have noticed the increased land value and started buying land from the villagers.

Sam shared to the SSCS team, “Really, it’s the women that suffer most. Because the men don’t have land anymore, they leave to go and look for work elsewhere.”

SSCS, working together with another project, were able to give the vulnerable families three months' worth of millet and corn which the women could plant on a field that had been specially allocated for their use.

• Thank God that he speaks to us and gives us wisdom when we ask.

• Ask that many more like Ibrahim* would come into a saving relationship with Jesus Christ.

• Ask that SSCS would be able to continue making a difference int he lives of the people they serve.

Do you want to equip farmers in West Africa to improve the food security of their families? You can give to SSCS by visiting sim.org.au/sowingseeds.

Do you want to read more about Tony’s story and the impact of FMNR around the world? Tony Rinaudo’s new book "The Forest Underground: Hope for a Planet in Crisis" recently won the Australian Christian Book of the Year award. You can buy the book at www.iscast.org/tfu/.