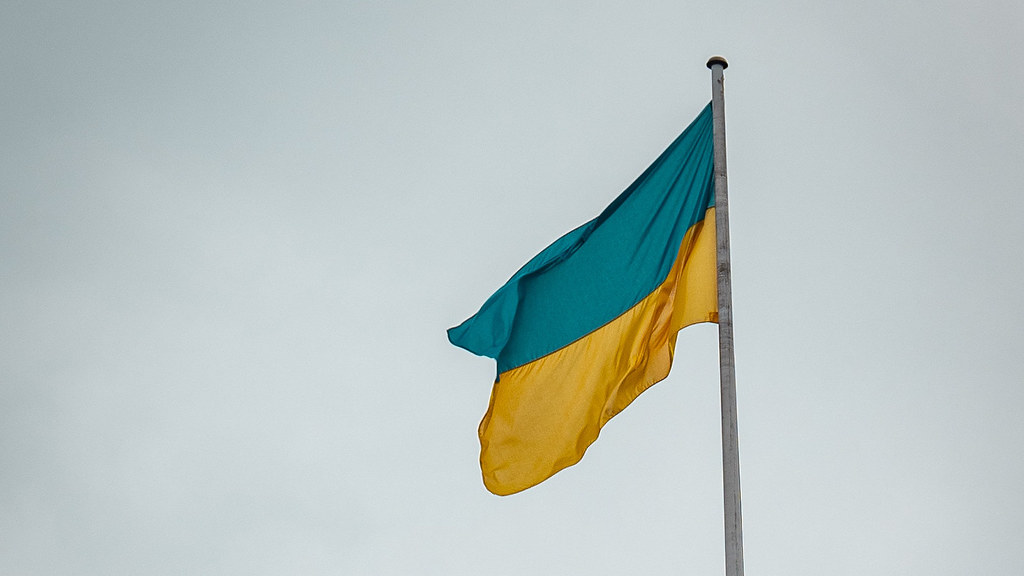 New Zealander Sarah Scott Webb (SIM For Freedom) has been working closely with colleagues in the European Freedom Network (EFN) and the World Evangelical Alliance (WEA) responding to the Ukraine war. She recently returned from two weeks in Sarajevo, Bosnia, where she met with Ukrainian church and denominational leaders, listening as they told their stories and discussed ways we could support them and their people. She explains:

Our conversations were raw, intense and often emotional….tears were shed on both sides many times.

I have come home reflecting on these conversations, and several key things that were repeated over and over again. One is that all the Ukrainians spoke of this being a spiritual war, not merely a physical one. They are convinced that God is using them as David to bring down Goliath, that he is using Ukraine to bring light into the darkness of the Russian nation, and that through this war the oppression and darkness that holds Russia captive will be broken and that God’s kingdom, peace, truth and light will come to Russia.

As I listened it felt like I was hearing the Old Testament come to life. They told stories of miracle after miracle. Of storms coming off the coast of Odessa that were so strong the Russian navy couldn’t land. Of strong winds blowing Russian parachutists into the Black Sea. Of strange swarms of bees attacking the Russian army as they tried to invade a town near Kherson. Of rockets and missiles landing beside families, in churches, and in preschools and not exploding. After the Ukrainian army drove the Russians out of Kyiv, two Ukrainian generals went on national TV and said, “We don’t know how that happened — our army wasn’t big enough to do that — that was the Lord’s army not ours that drove the Russian army out!” These testimonies and miracles are giving the Ukrainian people streng 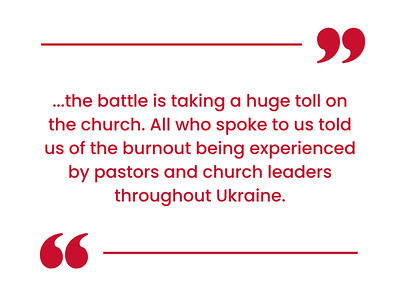 ​​​​​​​th to keep going, because every day they are seeing the hand of God at work.

In the midst of this, though, is the reality that the battle is taking a huge toll on the church. All who spoke to us told us of the burnout being experienced by pastors and church leaders throughout Ukraine.

In many towns and villages the church has been the only place still there to give help and support.* Pastors who have left feel incredible guilt for doing so, yet one Ukrainian pastor now based in Switzerland spoke of the revival that is beginning there, within the refugee community. A Swiss church leader told him “the Ukrainians are bringing revival to Switzerland.”

Pastors who have stayed in Ukraine feel incredible pressure to do so, because if they leave, who else will care for the people? They fear for the safety of their families and are exhausted and totally overwhelmed, yet another leader spoke of churches in western Ukraine seeing 60-70% new believers from refugees from the east. There is no doubt that God is moving in a very powerful way in Ukraine, but the physical reality is horrific. The conditions Ukraine are far worse than anything we see in our media coverage. The concern for survival over the coming months of winter is huge. Winter in Ukraine is cold; they have no power, no heat, no way of keeping warm; there are very real fears that thousands will die from cold.

I sat beside Ivan at lunch one day. He is the president of a seminary in Bucha that was bombed and looted, and he witnessed many atrocities being committed. He said to me, “I can’t believe you have come from New Zealand to be here.” I replied, “Ivan, many people in our country care deeply about what is happening here and many, many people are praying for you.” He was silent for a moment and got emotional as he said, ”it is this that gives us hope to keep going. We feel the prayers of the nations, and we are so humbled that people as far away as your country are praying for us. We have been humbled by the radical compassion of Christians around the world who don’t even know us, yet pray for us. Please tell the Christians in your country thank you. And please keep praying because we feel it — you are carrying us.”

• For a mild winter; that we will not see people dying of the cold.

• For an end to this war and for God’s kingdom to come.

• For our WEA trauma taskforce as we seek to support Ukrainian church leaders with appropriate trauma care.

* We are looking at how we can provide respite and pastoral care for pastors and church leaders, so they in turn can continue to care for their people.