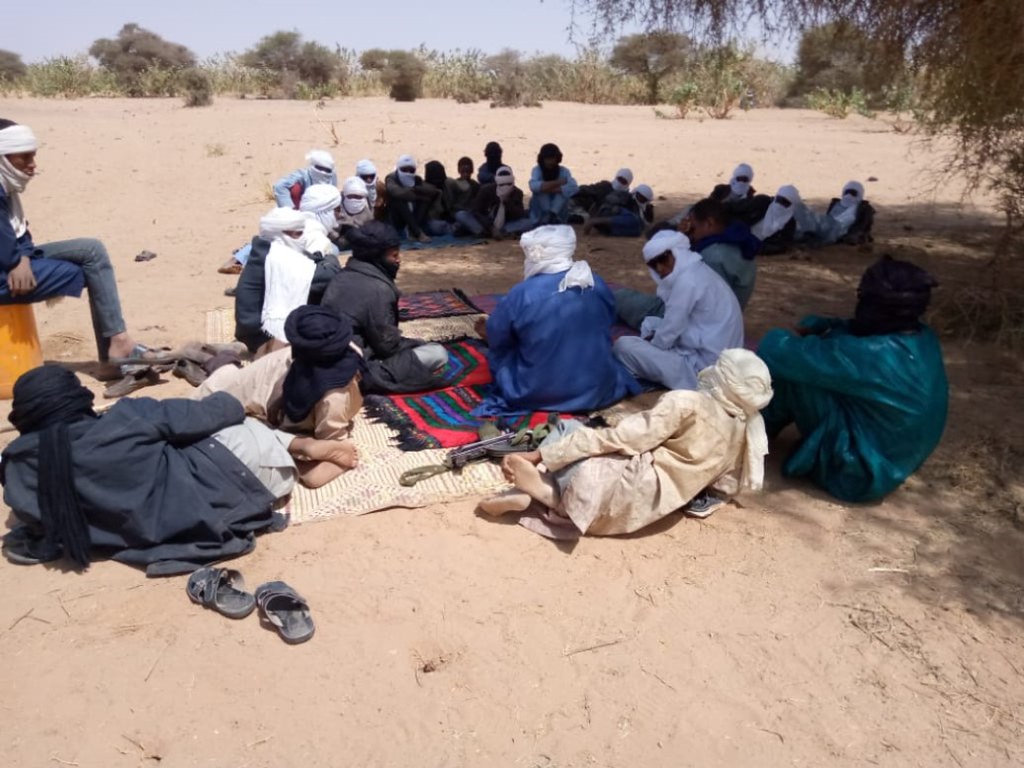 The Tamajaq (or Tuareg as they are often called in the West) travel across a vast area of the Sahara Desert, stretching from far south-western Libya, to southern Algeria, Mali, Burkina Faso and Niger, where the biggest group is found.

Also known as the ‘blue people’ – for their traditional indigo dye-coloured clothes – the Tamajak represent a Saharan offshoot of the Berbers, who have lived in North Africa for several millennia.

Translator Andrawes* and his wife joined the SIM Niger team in 1999, where he spent many years helping to translate the New Testament into the Tamajaq language.

Since then, Andrawes’ focus has been to help the good news take root in the heart of his people and to help remote believers grow in their faith by recording the gospel and making it available on SD cards to use on mobile phones and solar-powered Mega Voice radios.

“The Tamajaq live in an oral society, with an extremely low literacy rate,” he explains, “and being nomadic and semi-nomad, it’s easy to understand why probably less than ten per cent of Tamajaq people can read.

“They are used to hearing stories being told and listen intently, taking everything in; which is why we focus on helping them hear the good news in their own language so it can enter their hearts and make a real impact on their lives.

“We distribute micro SD cards and Mega Voice radios with gospel messages and the Tamajaq New Testament recorded on them; knowing these recordings will reach where we can’t go and be heard by hundreds, if not thousands of people, for whom this may be the only way to hear the good news about Jesus.

“We also proclaim the gospel through radio broadcast twice a week on national radio and people are listening to our programmes across Niger.

“We’ve received feedback from every region except one and listeners will call to tell us how much they appreciate the programmes –  some even ask if we can make them more often and longer than the 18-22 minutes!”

The Tamajaq Ministry seeks to:

- Share the good news of Jesus with the Tamajaq using audio and visual forms of communication.

- Care for people’s health and help with community development.

- Plant and strengthen the church among new believers.

Fifteen years ago, SIM helped set up a church in the main town nearest Tahoua (Niger’s fourth largest city) which is led by Andrawes’ friend, a Tamajaq pastor called Gad*.

Pastor Gad regularly visits three villages on his motorbike, which was bought by SIM supporters, spending time building relationships and explaining the gospel.

“Our ministry focuses on the Tahoua region where most of my people live,” says Andrawes.

“We see our work as firstly, correcting some false misconceptions Tamajaq people have about the Christian faith, preparing minds and hearts for the gospel message to take root, and helping them to grow in their faith in the Lord Jesus Christ.”

Needs are overwhelming in poor and remote communities and why Andrawes also seeks to serve the Lord among the Tamajaq through practical support.

“Access to any sort of health care is almost non-existent and the nearest medical centre is up to 40 miles away and only accessible by a motorbike, or on a donkey,” he explains.

“Because of little faith in the health centre, coupled with lack of education and money for treatment, people tend to treat themselves with traditional medicine first – including prayers from the local Muslim priest. When this doesn’t work, for obvious reason, they travel to a medical centre, but by then, their body is weak and their system doesn’t respond well to treatment.”

Thanks to the generous giving of SIM supporters, Andrawes and his SIM colleagues run several community development programmes, including supplying farmers with millet from the SIM Grain Bank and providing one meal a day for schoolchildren in the poorest villages.

“Niger may be a hot place, but it can get relatively cold, especially for people who are not prepared for it, so last year, we also distributed blankets and soap to the two schools we are supporting,” he adds.

“We hope to be able to do more in the area of education, beyond just offering a daily meal, as we all know that education is the key to any social and economic development.”

“Malaria is also a huge health problem for the communities where our ministry is and abundant rain means more mosquitos. Since the flooding crisis of summer 2020, more people are getting malaria, especially children,” says Andrawes.

“After many years, we are now by God’s grace, seeing our work bear fruit,” says Andrawes, “and we are extending our outreach into the Agadez region, which is an exciting ministry opening for me. I recently joined a pastor from Agadez to meet a group of men who were very welcoming and said they were Christians. This is amazing and now these new believers need teaching to grow in their faith.

“We also have two projects planned, including setting up a Tamajaq-speaking Bible school and a regional Bible school.

“Planting and strengthening the church is our ultimate goal and although we’re unsure of what church will look like in a nomadic and semi-nomadic people, we give thanks to the Lord that he is working among the Tamajaq.”

• Praise the Lord for Andrawes’ audio ministry in Niger and the gentle spiritual awakening, SIM is witnessing in the Agadez region.

• Pray the church will strengthen among new believers.

• Pray for God’s provision of funding for Andrawes’ ministry.

Partner with him by visiting our donation page, selecting the country nearest you, and using project number 962960.