New Uruguay mission school has vision for world missions
SIM has a commitment to see Uruguay reached for Christ. And through key partnerships with like-minded organisations, a new missionary training school called Todos Oiran (All Will Hear) is opening its doors in Montevideo, Uruguay.

SIM has a commitment to see Uruguay reached for Christ. And through key partnerships with like-minded organisations, a new missionary training school called Todos Oiran (All Will Hear) is opening its doors in Montevideo, Uruguay. Through this exciting venture, workers are engaging and equipping Uruguayans for local and overseas ministry like never before.

Uruguay is a hard society to penetrate in religious terms. Unlike its neighbors, atheism and agnosticism dominate the culture and the gospel has been slow to take root.

Despite the challenges, it's a country at a crossroads of world mission. The Church is growing within Uruguay as well as expanding its vision for overseas missions. With strategic partnerships, SIM is very much a part of taking the gospel to places it isn't currently - in Uruguay and beyond.

Costa Rican Andres Corrales has a vision as SIM Uruguay Director to see scores of Latinos sent out for ministry, wherever the least reached may be.

"This is why strategic mission mobilisation has become important," Andres says. "We desire to see Christians serve in missions overseas. But when we give young professionals the missionary message, there is also a logical call for them to continue serving in their own vocations, as these are some of the least reached areas of Uruguay."

The local church isn't without challenges, as a secular mindset has taken hold in some ways.

"Our society has suffered the sickness of individualism with a strong attraction towards living for yourself," Andres said. "This trend has sadly been transferred to the church with people misunderstanding the gospel, believing that the purpose of their lives is to live for their own dreams and for their own achievements, without considering God's will. Especially for the younger generation, understanding God's grace and our lives as a service to Him represents the perfect antidote against this trend."

Through a dedicated review process, SIM has identified partnerships as the most strategic means of using their resources. SIM Uruguay is partnering with COMIBAM (the international mission network in Latin America), La Red de Intercesores del Uruguay (The Prayer Network of Uruguay) and a local seminary. These efforts will combine to form the mission training school All Will Hear, whose purpose is to engage and equip Uruguayans for ministry in Uruguay and overseas.

The vision of All Will Hear is to establish a year-round school, offering topics such as missionary life, cultural anthropology, and world religions. The school will also host special conferences with international and national speakers. Each student will have a cross-cultural mission experience as part of the curriculum.

Andres is optimistic about the future of ministry involvement in Uruguay.

"We see a growing interest in the national church toward missions," Andres adds. "We can see the change of attitudes among national church leadership to take on the responsibility of gospel outreach, creating platforms for prayer and support in what God wants to do in the coming years."

How to pray for the Uruguay church

Andres Corrales is the Director for both SIM Uruguay and Preparing Outstanding Youth Leaders for Uruguay. He is a passionate missionary to young people, having spent more than ten years in youth ministries and missions worldwide. He was the national director of youth ministries for the Evangelical Missionary Federation of Costa Rica (FEDEMEC), where he mobilised Costa Rican young people for the mission field. He currently serves with SIM and as director of Youth Specialties in Uruguay. He is co-author of the book God's Invitation to the Adventure. 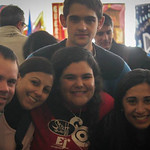 The aim of this project is to train and inspire leaders to see that they are not alone. We desire to increase spiritual unity by offering personal mentoring, advice and training to local youth leaders, helping them start new initiatives, and as they face different challenges in their ministries.