Loading the truck in Cotonou to get the Bibles out of port.

A ship bearing 4,000 copies of the Yom Bible arrived in Benin’s Cotonou Port at the beginning of August, marking the completion of an almost 70-year translation project.

Around 300,000 Yom speakers live in Benin and beyond, as far as Nigeria. Dorothy “Dodi” Forsberg, a Yom translator with SIM since 1976, worked with a team of three in recent years to arrive at this long-awaited publication.

Dodi said: “I desire to see a strengthening of the Yom churches as pastors and elder leaders read the Old Testament scriptures. They have had the New Testament since 1986. I hope to see people excited about having such a document in their language – Christians as well as those of other religions.”

Invited to take over ministry among the Yom by the Methodist church, SIM entered what is now Benin in 1946. The first translator, Gordon Beacham Jr, was assigned to the area with his wife Joyce in 1951. The son of the first Yom Christian, Osaze*, developed the written form of Yom with Gordon after extensive analysis and deliberation.

Much of the New Testament was typed by Joyce on a typewriter, till they acquired a computer and the necessary generator in 1982. On return to the US to raise support, Joyce continued her typing overseas, while Dodi, still in Tchaourou, Benin did her own share of work for three hours per day.

Dodi said: “I was born with a congenital absence of the left hand. So, I like to say that I singlehandedly typed in half the Yom New Testament on the computer!”

To commemorate this significant moment and release the Bible for purchase, a small dedication ceremony will be held on 29 August. The team planned on a much larger celebration, but due to COVID-19, the event is capped at 50 people.

Unfortunately, after this marathon project, Dodi has been distanced from Benin and seeing the shipment arrive. When the Bible went to the printers several months ago, Dodi travelled to the US, and COVID-19 travel limits prevented her from returning.

She said: “I have been disappointed that I couldn’t go back after the 4 months of mandated rest. … I don’t know when I’ll be able to hold a copy of the printed Yom Bible in my hands.”

The group plans to gather for a bigger reception once conditions are safe and restrictions are lifted. Dodi, nearing the same age as the project but in good health, earnestly hopes to attend the second celebration with her dear brothers and sisters in Christ.

• Each person who reads the Bible in Yom to know Christ and grow in love for the scriptures.

• The attendees of the initial dedication ceremony to stay safe and to rejoice over the successful publication of God’s Word in Yom.

• Dodi as she celebrates from afar. Pray she can attend the second ceremony and appreciate the result of her diligent service.

Update as of 31 August 2020: Pictured below is the moment the first box of Bibles was opened. Left to right is UEEB President (Pastor Alphonse Kinkponwe), Elie Boroté (SIM Bénin Togo IT Specialist and also Yom), Priscilla Ruddle (Acting Director, SIM Bénin Togo) and a representative from the local radio station. 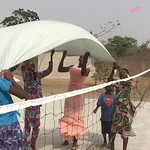 Oussie* was ill and suffering from malnutrition when she began coming to Alafia clinic at age three. Now, at thirteen, she is a different person with a sense of belonging and care. 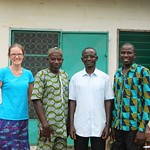 The long process of translating the Bible into Monkolé, a language indigenous to northern Benin, is drawing to a close.