By Chris Conti | Ecuador in south-america 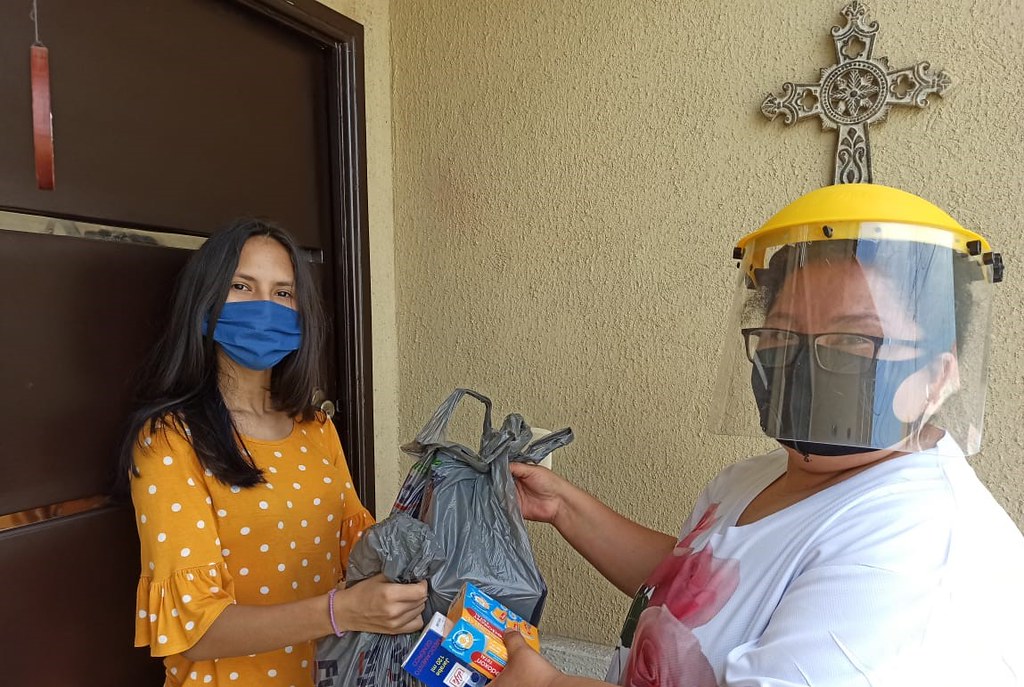 Julieta delivers goods to a woman.

“The virus should be confronted in Christ’s love and power,” said Julieta Murillo director of SIM Latin America.

No one knows the exact number of COVID-19 deaths Ecuador has suffered, especially during the months when infections peaked. Officially, as of the end of July, it was reported that 6,000 have died. However, Julieta calculates from information from family members and friends that work for funeral homes and governmental agencies that from March to May, the number was closer to 16,000, just in Guayaquil. The New York Times speculates that the number could be up to 15 times what has been reported for the country.

Hospitals were overwhelmed; funeral homes could not keep up. The photos of bodies wrapped in tarps left on the street made international news.

“It was like a war zone, death on every corner,” Julieta said. The images from the day she had to cross the city to take her father medicine haunts her.

“In the face of such need, it doesn’t matter if you get sick,” she said, but she and her team took every precaution as they distributed kits.

“I didn’t get sick at this time, thanks to God,” she said, “Of the whole team, not one person got sick during this time of service.”

It was a nightmare. Friends and family members got sick. Several died.

“Every family was grieving someone; there was no room left in cemeteries. It was so difficult to hear about so many people I know who have died,” Julieta said.

When Julieta’s mother got sick, Julieta and her housemate Maria Lola Moreno, director of Impacto Mundial, decided to take her home, knowing the likelihood of contracting COVID-19. Julieta read Psalms to her mother when she was at her worst, then as she regained strength, they read them together. She thanks God for this miracle of healing.

“I felt that I was going to die and prayed that they would not put us in the hospital where we would not come out,” she said.

“This gave me strength. I finally could get out of bed and sit in the living room, greeting people through the window. I saw God’s love through his people. We are so thankful for the infinite generosity and the love shown to us during this time,” she said.

The Psalms continued to help and strengthen her through panic and anxiety.

Though they have recovered from the virus, Julieta has been left with hypertension and thyroid issues. Maria Lola continues to suffer the effects of numbness and pain in her hands.

The projects continue, and they help as they are able.

Our agenda or God’s?

“We had a full agenda: training, trips, plans, but God changed this agenda. We have to learn to depend on God. We have to reject our plans and look at his agenda,” Julieta said.

There is hope in these opportunities. She said: “This is a chance to change our methods and structures and evaluate well. It is time that the Church says, ‘Here I am, send me’ to the Lord. I’ve had to wait and rest in God, knowing that I can learn from others, see where we have failed, evaluate well. I am in the stage of waiting on God and seeing new objectives.”

The Psalms that helped

Psalm 91 – We are with him no matter what we suffer.

Psalm 46 – He is our fortress in tribulation.