We desire to see relational transformation of our community by intentionally pursuing the lost and increasing the number of growing, reproducible Christ followers.

We desire to see relational transformation of our community by intentionally pursuing the lost and increasing the number of growing, reproducible Christ followers.

Communities where Christ is least known

In 1956, Andrew Foster founded Christian Mission for the Deaf. His vision was to break the many barriers deaf people face in hearing the Word of God, including illiteracy, isolation, stigmatism, stereotypes, communication barriers and people who are cruel and mean. In Mali, deafness is considered a divine curse.
All these factors hinder the integration of deaf people into communities. Foster knew education could achieve his vision, so he introduced American Sign Language and established schools across Africa. He understood that this would usher in the gospel for the Deaf people in Mali.
However, government authorities wanted it reduced to a simple association for the Deaf called AMASOURD. In order to fulfill his dream, Foster looked at other countries of the sub-region, including Côte d’Ivoire, Ghana and Nigeria. Unfortunately, Foster died in a plane crash in 1986. Today, AMASOURD exists in Mali, but it has nothing to do with Christ’s redemption story.
The Deaf population in Mali is little known at the national level, despite the presence of AMASOURD. Sources estimate the population at 40,000 to 70,000. Among them, the percentage of Christians is minimal. No church denomination in Mali has a sign language translator who can share the elements of the message, worship or any other activity, with the Deaf in the pews. Also, no known mission agency is prioritising the deaf in Mali.
SIM has been raising awareness within the Body of Christ about the need for a ministry among this least-reached group. The first workshop on bringing the gospel of Christ to the Deaf took place in August 2015 in Bamako, and all the denominations were invited. In December 2017, a team of six young people, under the direction of Moody Bible College, travelled from the United States to Mali, for a one-week teaching programme at Jigiya Kalanso, a school for the Deaf in Bamako.

Pray for pioneer workers in the city reaching the Muslim community.

Pray for workers among the Deaf.

Pray for workers for a unique ministry among Deaf students.

Pray for church denominations in Mali to see the need to reach the Deaf community.

Pray for a manager and a team for the development of a café-student centre. 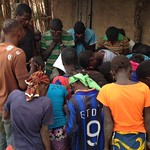 Amid challenges, God at work in Mali ministries

From the outside looking in, ministering in Mali is a formidable task.

Amid challenges, God at work in Mali ministries

From the outside looking in, ministering in Mali is a formidable task.