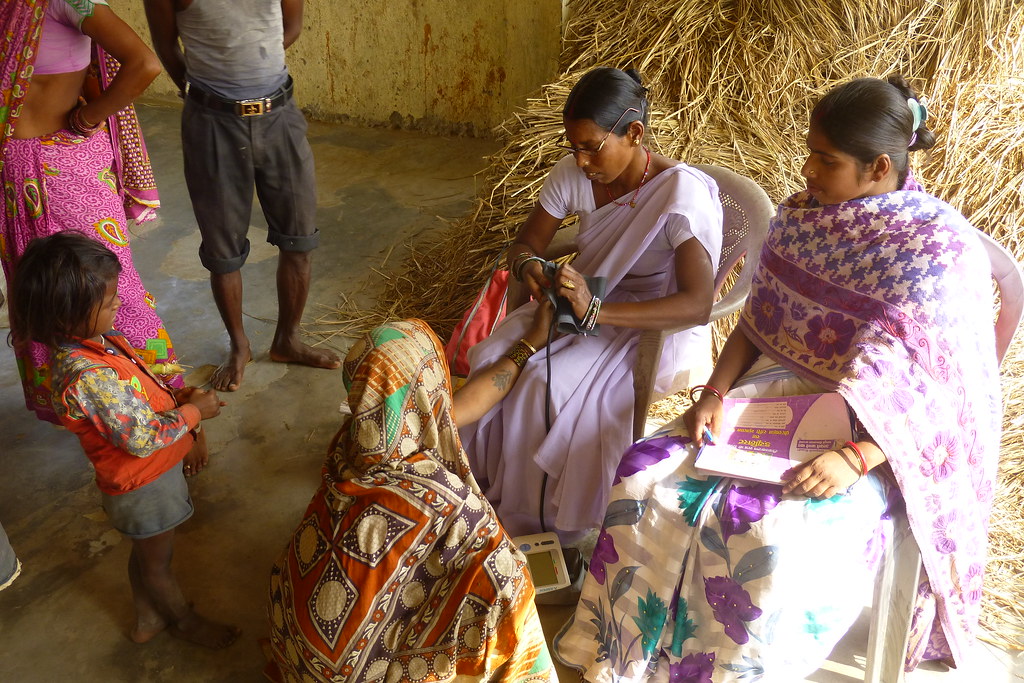 “I never thought I’d be able to give an injection!” Khushboo laughs, writing down the information of a child she’s just given a vaccination to.

Khushboo’s stubborn gaze and steady hands seem like they should belong to someone much older. Unlike most of the young women in her village, Khushboo meets people’s eyes and speaks confidently to patients and village leaders alike.

Like most girls from Khushboo’s village, she began life never questioning the expectations her culture placed upon her. She would stay in her parents’ home doing housework until she moved into her husband’s home to do housework and bear children. The best women, it’s believed in Khushboo’s village, enter their husband’s house and don’t go back outside until they’re carried out at death. No education, no involvement in the broader community, no options.

Khushboo, however, met a local volunteer with a community health and development group called Chetna. A partner ministry of SIM, Chetna was working out of a nearby clinic teaching young local women how to run a mother and children’s healthcare center. Khushboo couldn’t imagine doing anything like that, but after several encouragement visits from Chetna staff members, she was convinced to try.

Through the center, she learned how to give pre-natal exams, how to determine when a woman needed extra attention at the hospital three-hours away, and how to give vaccinations. Chetna staff noticed how quickly she learned. As her confidence grew they encouraged her to apply for the position of a village asha – a nurse who oversees the basic healthcare needs of people in the village and facilitates hospital visits for serious cases. Khushboo had no idea what that was or how to apply for it, so she didn’t think about it any further.

Khushboo eventually used her newfound skills to get a job in another local program. There she offered family planning information and helped at a mother and children’s clinic. Then she found a job elsewhere. “I’ve been 400 kilometers away from my village, making good money,” says Khushboo in awe of the opportunities she’s been given. “But now I’m back to help my villages here.”

Khushboo returned to her local area, got married, and now has two small children of her own. She reconnected to Chetna staff, who had begun focusing on helping village committees learn to serve their communities for themselves. Committees, funded by the government, are supposed to include five people specializing in certain health or sanitation needs. One of those positions is the village asha.

This time, Khushboo applied for and got the job. She’s responsible for three wards – somewhere around 2,000 people. “All my wards have 100% vaccination rate,” she says cheerfully before admitting “hospital births aren’t quite there yet, but I’m working on it”.

The challenge of the job suits Khushboo, “Until I’ve done something hard, I’m not satisfied with the day”.

A local organization has told Khushboo they have a job waiting for her when her children are just a bit older and she can go back to work full-time. She’ll be overseeing maternal and children’s health initiatives for multiple villages. The early investment of Chetna staff in Khushboo’s life will be affecting the lives of mothers and children for decades to come.