Serving in SIM International Leadership, Member Care and the Archives

Thank you for your support!

Remember you are givng to:
Joshua and Joanna Bogunjoko
Missionary Id # 6600

Please select which country you would give to, some countries will require the name or missionary ID listed above.

We both grew up in families of mixed religious expressions. While Joshua grew up in a family that mixed Christianity with animistic practices, Joanna though was born to a Muslim father and a nominal Christian mother, grew up with her grandmother who was a nominal Christian as well.
Joshua was active in church from childhood, but committed his heart to Christ in his second year of high school. He was privileged to attend one of the mission high schools established by SIM but now run by Evangelical Church of Winning All (ECWA), and it was there that he met the Lord. It was from this early age that he also encountered mission as he was taught by a missionary and several other committed Christian teachers. Joshua went to the University of Port Harcourt where he read pharmacology and then medicine, graduating in medicine in 1988. Joshua sensed a call to mission during his first year of medical school. He was very active in the evangelical student movement in the university, called the Nigerian Fellowship of Evangelical Students (NIFES). Joshua joined ECWA Evangel hospital in Jos, Nigeria in October of 1988 as a pre-registration house-officer. He did a year of national service at the military hospital in Rukuba near Jos, and then returned to Evangel hospital in 1990 to do his residency training in Family Medicine with the West African College of Physicians. In 1992, Joshua did a short-term mission work at SIM Hospital Galmi in Niger republic at which time he felt the Lord was calling him back to Galmi to serve long-term.
Joanna committed her heart to Christ in her third year of medical school in Ogun State University in Nigeria. She was also blessed with good pastors who discipled her and encouraged her faith. She was active in church serving as a Sunday school teacher. Joanna joined the University of Ilorin Teaching Hospital for internship in 1992. It was during this time and through contacts with Joshua's friend that the Lord began to work in Joanna's heart, leading her to consider mission work as a possible direction for her life. It was also through this friend that they met in May of 1993. After their marriage in November of 1993, Joanna served at the ECWA Evangel hospital Jos and also did a semester of studies at ECWA Theological Seminary, Jos.
Joshua and Joanna started their ministry at SIM Hospital Galmi in June of 1995 as members of Evangelical Missionary Society of ECWA (EMS) Nigeria, and SIM associates. In 1999, at the end of their first term in Niger, they went to Briercrest Biblical Seminary in Canada, where Joshua earned a Master of Arts degree in leadership and management, and went on to do a year of French studies at Laval University while Joanna took evening classes at Eastern Quebec Learning Centre, Quebec city.
In 2001, Joshua and Joanna became full members of SIM. On their return to Galmi in June of 2002, Joanna went back to her medical practice in the hospital, while Joshua took on the position of chief medical officer for the hospital. He continued in this role till December of 2003 when he was appointed the director of the hospital, a position he held until their move to the SIM International office in March of 2006 when Joshua was appointed as SIM Deputy International Director for Europe and West Africa. In this role, Joshua provided leadership to SIM's ministry and teams in Europe and West Africa. In June 2013, Joshua took on the role of International Director for SIM. Joanna serves in member care and in the SIM International Archives.
Joshua and Joanna are blessed with two lovely children, Jochebed and Joel. 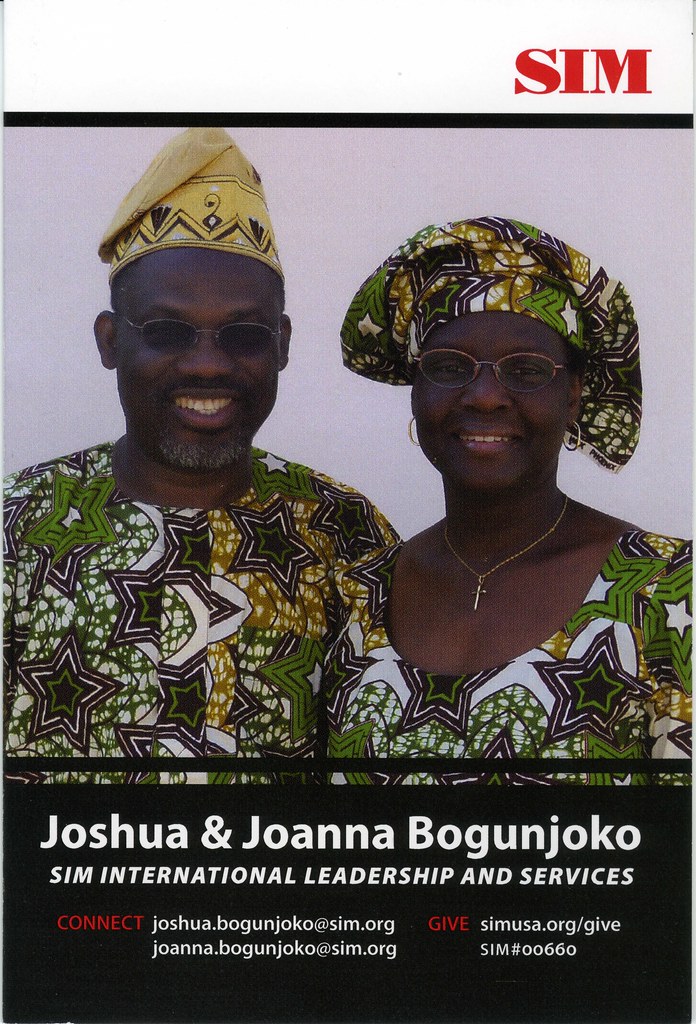