So there's a phrase people here often use when encouraging us in our language learning. They'll say, "N naa kukeri!" which means "You're doing well!" We appreciate their kindness.
But one day on my way home from town, I was passing a little store by our house where we often buy eggs and things. The owner was one of the first people to teach us some of the Sisaali language and we've gotten to know him and his family a bit.
So, as I neared the store I prepared my Sisaali greetings in my head. Although there was a woman making a purchase from him at the counter, I've learned that interrupting a conversation to greet someone is no interruption at all in this friendly culture.
As I passed by, I called out in Sisaali: "How's your afternoon?"
Then we had the following exchange:
"It's fine!"
"Is your wife well?"
"Oh, she's well."
"How's your work going?"
"Good, where are you going?"
"I'm going home to cook white-people food for my husband."
And we laughed.
But as I turned towards home, the woman at the counter who'd been observing our Sisaali interaction, called to me in English, "Well done! You've done well."
I was puzzled by the tears I felt in my eyes from her kind words, until I realized this was the first time I had ever heard those words spoken in English here. Although I had known the meaning of the Sisaali phrase that communicated the same encouragement, to hear them in English touched my heart deeply.
And as I walked home I was thinking, Oh... So this is why we're learning the heart-language of these people. It really does touch hearts in a special way!
You can support the ministry of Robbie and Heather Oleniuk by visiting their Ministry page! 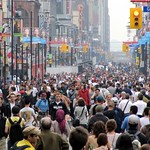