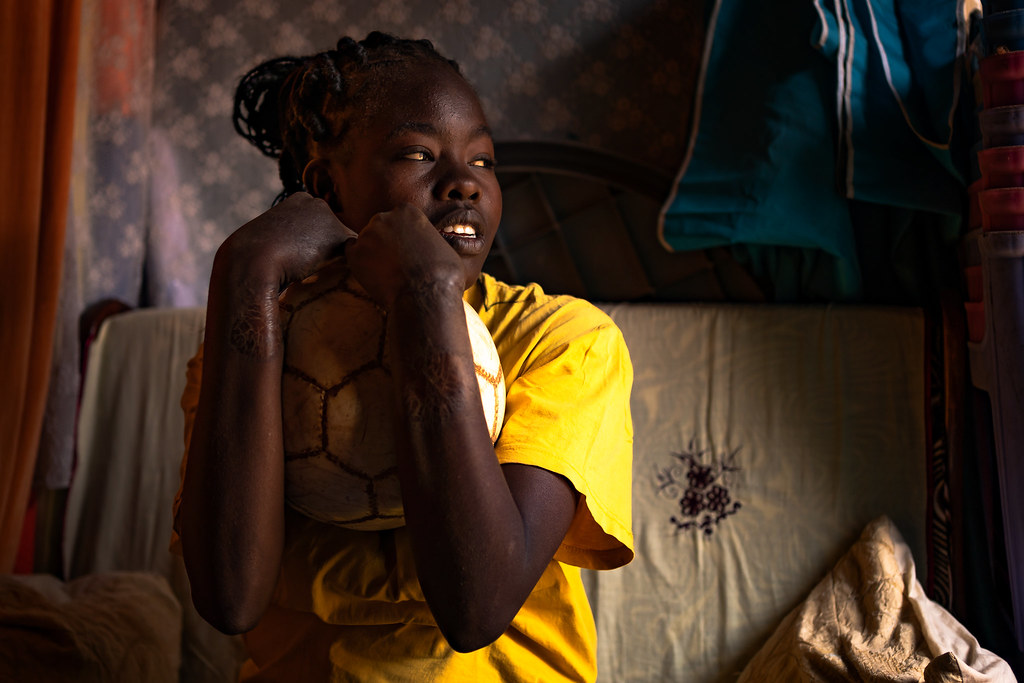 Joy with a football by Adrian Butcher.

One weekend in 2008, when Joy was in primary school, her younger sister was so hungry that Joy went out and borrowed ten shillings’ (roughly ten cents) worth of food from the neighbour’s restaurant.

When her father came home, and heard what Joy had done, he was furious. He felt she had shamed him in front of the neighbours. Maybe they would think he was unable to provide for his family.

He led the children back into the house, tied newspapers on Joy’s hands, poured paraffin on them and on her back, and lit the fuel. She struggled but her father was too strong for her.

Joy’s sister was crying but was told to just keep eating her food. Joy struggled and eventually broke free. The neighbours then found her.

She showed me her hands. The burns left noticeable scars across her wrists. The man who had raised her was, in her own words, “a monster.” The scars, much like the memories, can’t be erased.

Her father was taken into police custody. But while Joy was physically safe, her ordeal was far from over. Many of her relatives blamed her for breaking up the family.

When I asked her what the hardest part was, a flurry of thoughts came out: her father being in jail; her sister, young as she was, having to testify in court; losing a whole year in school with friends for having to attend legal proceedings; feeling like no one wanted her.

She would have ended up in the streets, she says, like many of the youth who fall through the cracks after hard times. She might have ended up an alcoholic like her dad, she says. “I would have wasted my life.”

But she was drawn to the sanctuary of the football pitch. She had learned to play at a young age. The boys played in their shorts while she wore a dress. It didn’t seem to matter.

And it’s through the pitch that Joy found God. She saw him in the hands and feet of the coaches, heard his voice when the Scriptures were tossed around in conversation, got to know him through study of his Word and through church.

“God is a life-changer,” she remarks. With time, God gave her the strength to forgive her father. She remembers the day.

“When we met … I hugged him and stayed there for a while. And that’s it. It was over.”

God found her father also and he came to believe in Jesus. He is a different person now. He has quit drinking; he preaches and gives the family memory verses.

Now, Joy works as a football coach with young people. She knows what some of these kids are going through: absent fathers, troubles at home and school.

Some of those kids are coming to football training after a hard season. They are coming to the pitch, carrying their own scars. They’re looking for a safe space where they are needed and accepted. And here on the pitch, with Joy coaching, they are always welcome. This pitch is a sanctuary where God is invited and preached. Every time they meet on this sanctuary, he shows up also carrying his scars. Ones that remind us he’s not given up on you. Joy knows this, and the kids she works with will soon discover this for themselves.

• For other young lives to be changed through Joy’s work.